Automating testing lets you save resources by automatically checking the functioning of most product components. However, the functioning of each particular function can’t ensure the successful execution of all business scenarios.

After adding new functionality to one of our client’s software products, we had to revise our existing acceptance tests as they were too reliant on previous functionality. In search of an efficient solution, we turned our attention to a new approach provided by behavior-driven development (BDD). This methodology initially builds software development processes based on business requirements and scenarios. To simplify our testing logic and improve the quality of our software development, we decided to implement BDD tools for acceptance testing on one of our recent projects.

In this article, we’ll share our experience of test automation using the Gauge framework and provide a brief overview of its application.

This article will be useful for QA specialists who want to improve their software testing processes.

In search of alternatives

Though this type of testing is usually performed right before a product is delivered to the client, internal acceptance testing can be done at intermediate stages of product development.

Moreover, since our developers initially assumed that they would be the only ones working with the acceptance test results, the data we received in the end was difficult to understand for our testers and managers.

All in all, the necessity to constantly maintain our tests and the complexity of the test results forced us to look for a third-party solution.

In search of alternatives

When searching for the most suitable test automation framework, we took into account our top requirements:

After a short investigation, we found that the first requirement (allowing all stakeholders to easily describe test scenarios) could be met with the behavior-driven development methodology. So we decided to consider this approach and choose a BDD tool.

BDD is a software development process that’s based on combining business interests with technical insights. BDD emerged from test-driven development (TDD) and also uses tests. The tests are created before product development and their successful completion is based on compliance with business requirements. This approach allows you to write tests in natural language, so our first requirement could be satisfied with any BDD tool. After analyzing several ones, we were drawn to a free open-source project called the Gauge framework, as it offers a range of useful features that make acceptance testing much easier: 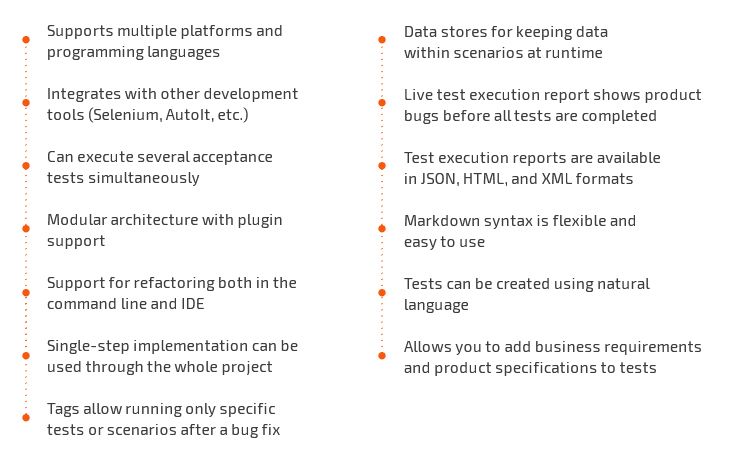 The most popular BDD instruments like Behave and Cucumber use Gherkin syntax, with the main clauses being Given-When-Then. These clauses pose certain limitations for describing test cases. Fortunately, Gauge allows you to write tests almost without syntax limitations. So creating tests in Gauge doesn’t require special knowledge.

We also discovered that Gauge has all the functionality to meet our other requirements. To simplify test support, this framework can quickly introduce changes to tests with the same steps. Possible bugs in Gauge are fixed by its developers, so Gauge integration makes our tests easy not only to develop but also to support.

Finally, Gauge allows us to create test progress reports in HTML, so test results are easy for anyone to understand. Additionally, we can get a report with a list of all existing tests that we can filter and search through.

For our project, we decided to run automated tests written in Python for Windows. Gauge is a console-based application, so it has no graphical user interface.

The framework installer can be downloaded from the official website.

You can also use a packet manager, for instance, Chocolatey for Windows.

While Gauge has a module structure, the minimum set of plugins can be installed for the desired programming language just a few commands. The gauge-python plugin and the getgauge module for Python can be installed with the following two commands:

Now, a new template can be created for a project. To do this, we initialize a new project in the language of our choice in an empty directory.

After the template for the Gauge project is created, we can monitor test performance. The project includes a sample specification written in Python, the language we’ve selected. If everything has installed successfully, we can run the tests with this command:

A plugin for HTML reports will be installed automatically before the project starts. There are also plugins for getting reports in JSON and XML formats that can be installed manually.

For storing testing objects (for instance, DLLs), we’ll create an Artifacts folder in the new project.

Gauge uses Markdown as the markup language for writing scenarios. Thanks to UTF-8 support, scenarios can be written in any natural language. We used English for our project.

Gauge doesn’t apply the Given-When-Then approach to writing acceptance tests, so all steps have equal ranking. Steps can be divided into logical groups with the use of markers. It’s possible to combine scenarios with any common feature in a single file, called a specification. The size of scenarios and specifications is unlimited.

However, specifications can only be parsed if:

This is the minimum set of components for getting an executable scenario. However, you can also use other components to expand the test capabilities:

You may notice that these two scenarios don’t have matching steps. In practice, it’s best to avoid using different step definitions for similar actions. This simplifies scenario support and minimizes the risk of duplicating the same steps.

In this case, steps can represent concepts that contain sets of other steps. Concepts created from the implemented steps are executed immediately.

Here’s an example of a file with concept descriptions:

Scenarios with more abstract steps can be useful for all stakeholders, who can also edit them. Detailed steps in concepts that are hidden from scenarios will be available only for testers and developers.

You can find more information about how to create specifications in the Gauge tutorial.

For our project, we wrote our steps in Python. A simple step implementation looks like this:

The @step decorator accepts the line with a step sample. After this, the actual implementation of this step is provided.

A step that has already been implemented can be added to any other project scenarios.

For test execution, Gauge offers to use the path to either a specs directory, any subdirectory, a particular specification, or a scenario. In each of these cases, it’s possible to specify several paths.

You can also use scenario and specification tags to execute certain groups of tests. For example, you can include or exclude scenarios with specific tags. Complex combinations of tags are also supported in Gauge.

Here’s an example of a command that executes only scripts with certain tags:

With this command, all scripts will be executed except those containing the specified tag:

After running the Gauge project, the console displays the name of the currently executing specification.

There’s a separate line for each scenario, and each step passed is marked with the corresponding letter: P (passed) or F (failed). For failed steps, Gauge provides error names.

Before test execution, Gauge checks the steps and their implementation. If there are issues such as absence or duplication of any step, the corresponding error will be displayed.

After finishing all tests, Gauge creates a report in the Report folder. Here’s a sample HTML report: The report provides statistics on completed tests and detailed information on failed steps. If necessary, a screenshot made at the moment of failure can be attached to each failed step.

Using Gauge, our acceptance tests have become more transparent and require less maintenance. Now, automated acceptance tests can be written by our testers and not only by our developers, as was the case with our previous approach. Test results are easy to understand and are regularly reviewed by both testers and developers. And managers can also get the results of automated tests when necessary.

If our automated acceptance tests find any serious defects in the release version of a product, the framework automatically notifies the client about it. The results of full tests are automatically recorded in TestRail.

The Gauge framework offers additional benefits for both testers and developers:

However, we also encountered some pitfalls when we used Gauge for test automation:

When working with the Gauge framework, we noticed that test performance may be unstable. An update of one of the plugins or to the Python interpreter sometimes leads to compatibility issues. Unfortunately, the framework developers don’t always fix these issues quickly, so our specialists have to make additional efforts to cope with them.

We also faced difficulties because of our style of writing scenarios. Even though Gauge doesn’t have syntax limitations compared to other frameworks, our scenarios appeared to be too specific. This isn’t an issue for a small product, but as it grows, it becomes difficult to work with a great number of detailed steps. More importantly, while giving us little to no benefit, such detailed tests significantly increase execution time.

Careful planning of acceptance testing processes might help avoid some of these difficulties when using the Gauge framework. Particularly, you need to take into account the possible growth of your product and develop a suitable and succinct architecture for test scenarios and their implementation.

Dealing with the bugs of the Gauge framework is a bigger challenge. But since the framework has just recently come out of beta, these issues are quite understandable. We can only hope that the framework will continue to be developed and its bugs fixed.

Using the Gauge framework for automated acceptance testing, we successfully achieved transparency in our tests and test results. Now, our automated test scenarios can contain detailed business requirements and product specifications. They’re easy to review and edit and can be understood not only by our developers but also by our testers and managers. Thanks to automated Gauge tests, we can spend less time and effort on manual testing without reducing product quality.

Gauge has allowed our developers to detect and fix almost all blocking defects. Though our testers still have to deal with critical defects, their number is much fewer than in projects where automated Gauge tests aren’t applied.

After this experience using the Gauge framework, we’re planning to continue implementing the behavior-driven development approach in our upcoming projects.

Apriorit has a team of QA specialists whose expertise is confirmed with ISTQB certification. Contact us if you need to ensure the quality of your software.