Our client is a financial services provider. They were launching an international remittance payments project based on blockchain. Before contacting Apriorit, they created an Ethereum-based solution, but it wasn’t fast and flexible enough to meet clients’ needs.

To bring clients’ vision to life, the Apriorit team designed a smart economy, created an Ontology-based network, and developed a DApp, web wallet, and Android application.

Download a PDF version of this case study
(1,65 Mb)

Our client is a financial services provider with strong demand internationally. They wanted to create an innovative solution to facilitate global digital payments using blockchain technology.

Our client wanted to start a blockchain-powered remittance service that could support a high volume of transactions. Originally, they had a token based on Ethereum, but it had a number of issues:

They needed to build a brand-new blockchain-based cloud solution to replace this system and entrusted the task to Apriorit.

We created a solution with a maximum capacity of around 3,000 transactions per second. Transactions in our solution cost less than $0.0001 each.

Moreover, fees are compensated for transactions generated by the DApp, meaning DApp users don’t pay anything. A fee is charged only for personal transactions between users. At the early stages of the project, Apriorit experts prepared and discussed with the client several possible scenarios for implementing this blockchain-based remittance service. Instead of developing a new network from scratch, we offered to create a fork of an existing open-source solution. This allowed us to speed up work on the project.

We decided between the Ripple and Ontology networks as a starting point for development. Ripple has a lot of built-in functionality to facilitate large-scale payments and features a robust B2B payment solution. However, the Ripple network lacks functionality for currency transfers and has a high transaction throughput.

That’s why we decided to use Ontology. This network is more flexible, allowing you to add custom business logic to your solution using smart contracts. As a result, our developers could easily expand the network’s functionality. For example, as per customer demand, we added a complex reconfigurable fee structure, different user roles, and complex user interactions.

After discussions, we divided the scope of work on the project into six phases. 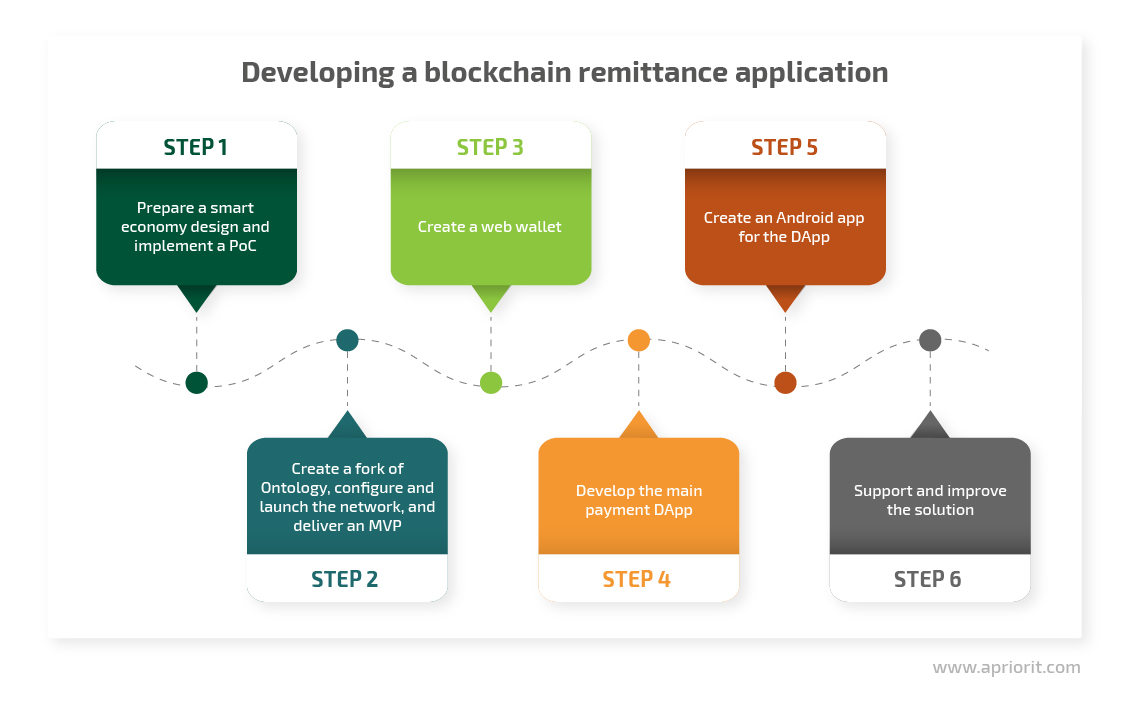 All of the network components we used during development were either based on open-source projects that we modified to fit our client’s requirements or developed from scratch by our team. To deploy our solution, we used the Amazon Web Services (AWS) cloud infrastructure.

We consistently communicated with the client during the project, informing them of progress, the project status, and planned tasks. Assigning a dedicated project manager is part of the Apriorit delivery process. It makes our projects more transparent and manageable.

To keep our client up to date, during each phase we:

The smart economy provided a good starting point for this project. During several discussions with the client, we refined the design and established additional requirements such as fees and referral rewards.

Next, we created a proof of concept (PoC) implementation of the smart economy payment system. Creating a PoC is common practice in blockchain projects, as it allows you to verify the efficiency of the app’s core idea. Our PoC included smart contracts and a basic DApp that we demonstrated to the client.

This useful practice helped us to identify new requirements that weren’t discussed before and to be on the same page with the client. Also, the PoC allowed us to discover potential flaws in the system at an early stage. These flaws were fixed during product implementation.

Our team prepared smart economy specifications simultaneously with other development tasks, as the discussion of the details didn’t affect more general tasks like creating a blockchain network.

Phase 2: configure and launch the network

After finishing the smart economy specification, we focused on delivering a minimum viable product (MVP). An MVP is an early version of an application that contains enough features to satisfy the first users. It helps us get real feedback from customers before development is finished.

Our MVP contained cryptocurrency that could be created and distributed to investors. Later, this cryptocurrency was used to power the blockchain-based application, including the main payment DApp.

We also adjusted the rewards and precision of the coin at our client’s request. The network was configured and extensively stress tested. Stress testing proved that the network was stable under heavy loads. Also, this type of testing determines network limits and possible models of failure.

Once we finished testing, the team released the main blockchain network.

The third phase included creating a wallet that allows users to send and receive tokens as well as claim investments. As our team did when implementing the blockchain network, they used an existing open-source implementation — in this case, the Ontology web wallet — instead of starting from scratch. However, we made extensive modifications to the wallet to bring it up to our client’s requirements:

Read also:
The Convergence of Blockchain and AI: Applications in Finance

During the fourth phase, our goal was to launch the main DApp that features blockchain-backed currency transfers, even with fiat currencies. We achieved this goal by using stablecoins — a kind of cryptocurrency tied at an approximately 1:1 ratio to a certain fiat currency. Users can receive stablecoins by exchanging fiat money through agents.

Agents act as gateways for DApp users who want to deposit or withdraw fiat money into the system. In exchange for fiat currency, users receive stablecoins, which can be used for digital transfers.

At this stage, most of the smart contracts were already in place thanks to the PoC. Our team improved smart contracts to ensure the security and stability of the system.

Security is the key reason people trust blockchains, so we needed to make sure our smart contracts held up to the challenge. To ensure that, we developed smart contracts keeping in mind our own vulnerability database. Also, it’s good practice to perform penetration testing before implementing smart contracts.

In this project, we added an escrow feature to increase trust between agents and users. This feature allows both parties to deposit and withdraw currency without requiring mutual trust. Also, we used smart contracts as the on-chain backend for the web-based DApp.

The DApp was written using Node.js and React. Our application is compatible with wallet files exported from the web wallet, so users can create a single account for the web wallet and DApp.

In order to use our client’s solution, a user needs two accounts:

Registered users can transfer or exchange stable fiat-backed currencies and withdraw or deposit these currencies with the help of local agents.

When we developed the PoC, our team noticed performance issues with the DApp. For instance, accounts with a large number of transactions took a long time to load because of constant communication with the blockchain network. This could be a serious issue for an international financial project.

Another important activity at this stage was the expansion of cloud infrastructure on AWS. By this point, the project required over 40 servers and two Amazon Relational Databases. A DevOps engineer orchestrated AWS resources and set up continuous deployment. We also improved security by adding policies and access management.

By this stage, users were actively using the application, and we started to receive feedback from both end users and our client. This feedback led us to create an Android app to provide convenient access to payments.

This approach allowed our team to add a convenient app without spending too many resources building it from scratch. For the client, having an Android app makes their application more comfortable for end users.

Phase 6: support and improve the solution

The final phase was dedicated to updating and improving the platform. In particular, we:

The block explorer helps users and the client analyze the blockchain transaction history and check for any suspicious activity in the network.

Apart from the main development process, our team performed some additional tasks requested by the client:

These tasks weren’t included in the overall scope of the project, but they were necessary to provide a great service for end users. They also helped us ensure the security and stability of the system.

Our client acquired a complex remittance blockchain platform that corresponded with their initial vision of the project. The proof of concept helped us identify potential issues in primary requirements. Then we proposed a smart economy and discussed it prior to development. Throughout the whole process, our client was closely involved in development. Thanks to our flexible delivery process, we easily made adjustments to project requirements on the fly. Our team was not only responsible for developing the system but for writing technical and user documentation.

Our QA engineers ensured the system was stable. Constant monitoring and support guaranteed that it’s robust and secure. As a result, our client acquired a solution that meets their needs in terms of flexibility, functionality, operating speed, and transaction cost.