This article is a logical continuation of the Simple SST Unhooker article. This article is written as an answer to the article Driver to Hide Processes and Files. Second Edition: Splicing by Serg Bratus.

I will try to oppose the splicing method to remove all the hooks, which setting is described in his article.

What is the best way of dealing with splicing in the context of struggle with hidden processes? Obviously, the best way is to verify the whole ntoskernel image entirely.

The verification of the loaded (original) image with a file is provided in the previous article. But I analyzed only a part of ntoskernel – sdt / sst – there. It is possible to expand the functionality of the previous driver so that it passes through all the sections and verifies them, as the windbg !chkimg extension does:

“The !chkimg extension detects corruption in the images of executable files by comparing them to the copy on a symbol store or other file repository.” (for more information, see http://msdn.microsoft.com/en-us/library/ff562217(v=vs.85).aspx).

In fact, we need to write something similar. We can use memory mapped files, just like I did in the previous article to compare the loaded ntoskernel with the file. The easiest way is to take the old driver as a basis and add the necessary functionality to it. As far as the executing ntoskernel.exe system is a standard PE file, the verification algorithm will repeat some actions of the PE loader.

“It’s important to note that PE files are not just mapped into memory as a single memory-mapped file. Instead, the Windows loader looks at the PE file and decides what portions of the file to map in. This mapping is consistent in that higher offsets in the file correspond to higher memory addresses when mapped into memory. The offset of an item in the disk file may differ from its offset once loaded into memory. However, all the information is present to allow you to make the translation from disk offset to memory offset (see Figure 1).” (for more information, see http://msdn.microsoft.com/en-us/magazine/cc301805.aspx)

That’s why we have to verify the file section by section too.

PE format is well described in the article mentioned above, so I will not describe it entirely. I will describe it only from a practical point of view.

The PE file section is described by such structure:

The next figure illustrates the way of using its fields: 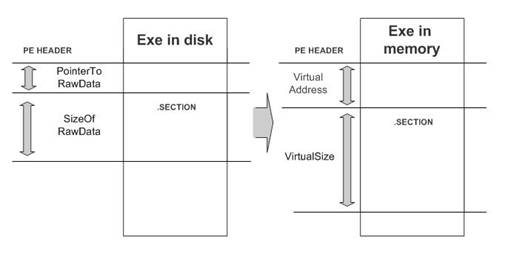 Figure 1. PE header. Section on the disk and in the memory

You can do this as follows:

We will use this function in future because it is virtual addresses that are used in all PE tables.

If we just map the file and try to compare it with the loaded image, relocations are the first problem we meet.

Here is the thing: the code, which is saved on the disk, stores all the absolute addresses as relative to the ImageBase value from the OptionalHeader of the PE file.

For example, the function from ntoskernel, which is just mapped in the memory, can look as follows:

The absolute address is moved to ECX in this function:

We can view the value of the ImageBase image by the lm + dh commands:

That is, image base is equal to 0x400000. If ntoskernel always loads at this address, the offset information is needless. But as far as ntoskernel usually loads to high addresses at some moduleAddress address, NT loader uses the information from the relocation table to transform relative offsets into the absolute ones.

The relocation table is stored in a special section of the PE file. It is a chain of records, each of which is described by the header IMAGE_BASE_RELOCATION:

MSDN describes this structure as follows:

“Immediately following the IMAGE_BASE_RELOCATION structure is a variable number of WORD values. The number of WORDs can be deduced from the SizeOfBlock field. Each WORD consists of two parts. The top 4 bits indicate the type of relocation, as given by the IMAGE_REL_BASED_xxx values in WINNT.H. The bottom 12 bits are an offset, relative to the VirtualAddress field, where the relocation should be applied.” (for more information, see http://msdn.microsoft.com/en-us/magazine/cc301808.aspx).

If we have such entry in the table:

This means that two WORDs, which describe the offsets, follow it. Let it be such values:

It means that the entry describes two absolute addresses, which are located at the 10100 and 10200 virtual addresses. Based on the type of offsets (in this case, it is IMAGE_REL_BASED_HIGHLOW(3)), loader will perform such actions to process the record:

We can visualize these actions as shown of the picture below: Figure 2. Module before and after relocation processing.

We have to apply the relocations to our memory mapped image of ntoskernel in the same way as NT loader. It is important not to forget to translate virtual addresses from the table to the raw ones using the ConvertVAToRaw function, which is described above.

There is an interesting moment. If we use the same diff, which is used by the loader of the original image, we will get such image:

Figure 3. Our module after processing the relocations.

In this case, we will be able to compare sections even using the memcmp.

Function that adjusts all the relocations will look as follows:

Where ProcessRelocationEntry is as follows:

After execution of the FixRelocs function, our loaded module will look like as in Figure 3.

We have only one task, except of the relocations. The task is to process the import tables.

Does Ntoskrnl import anything? Yes, it uses some modules. For example, in my Windows 7, they are as follows:

Obviously, this list can be different on different Windows versions.

The import table is well described in the Injective Code inside Import Table article (for more information, see http://www.codeproject.com/KB/system/inject2it.aspx) and in other sources. That’s why I will not describe it here.

Let’s concentrate on the algorithm of import and export linking. The task on this step is to link the ntoskernel import table with the corresponding exported functions of other loaded modules.

This is the algorithm in a Nassi-Shneiderman diagram form (see http://en.wikipedia.org/wiki/Nassi%E2%80%93Shneiderman_diagram): And this is its implementation:

The LinkThunk function task is to fill the u1.Function address value field for the thunk, with which it is called:

Finally, after this step, we can compare our loaded module with the original one in the very simple way:

In the sources, this function is slightly improved to find 1-byte differences.

The API was implemented for checking Ntoskrnl integrity using all stuff described above:

It can be simply used:

For example, the code that cancels all changes of the NT executive system looks as follows:

I must say that a very interesting detail appeared here.

Program still shows the one byte difference on the clean system!

No, it is not. The windbg u (Unassemble) command clearly shows that the difference really exists.

This is it in the file:

As we can see, two functions differ only in the first byte. Why did this byte change?

After some research I found out, that the NT boot loader (http://en.wikipedia.org/wiki/NTLDR) transfers its knowledge about the CPU processor properties to the executing system in such way. It performs something like this:

if the processor has all necessary characteristics for this function execution.

Using this information, we have to change the final version of the ScanAllModule procedure. Now, it just skips a 1-byte change if it is in the beginning of the RtlPrefetchMemoryNonTemporal function:

The m_pRtlPrefetchMemoryNonTemporal variable contains the name of the function:

This solution is not good enough for production code, and it would be better to think about something more universal, but it is quite appropriate for this article.

Now, we will show the work of the developed driver.

Here are the results of its work on a clean system: Figure 6. The results of unhooker.exe stat work on a clean system.

And now it’s time to fight with the the driver from the Hide Processes and Files. Second Edition: Splicing article! Let’s deploy it and hide all processes named calc.exe: To demonstrate all possibilities, I added all the functionality to the old driver and updated the unhooker.exe console utility. Its syntax did not change from the last article: utility can be started without parameters; in this case, it shows information about its abilities:

Let’s try to diagnose the system with the help of the unhook stat: Figure 8. Resalts of the unhooker stat work in the infected system. Figure 9. Result of the unhooker unhook work on the infected system.

Hurrah! The calc.exe processes are visible again and it means that we succeeded.

Steps are the same as in the previous article.

Thank you for your attention!