If you prepared the testing reports without making the preliminary analysis of the findings before, please start doing it. The correctly prepared report on the results of testing is a powerful tool for the optimization of the software development process. That is why let’s pay special attention to this process.

This article includes practical recommendations concerning the preparation of different types of testing reports and their ready examples.

What is the notion of report on the testing results?

The Testing Report is a document, which contains the following information:

The goal of the tester is not only to perform testing. It also consists in the correct design of the findings for their further use by developers and other specialists, who take part in the development of the tested functionality or project. That is why the Testing Report is a very important document.

Thus we can say that the Testing Report is the main source for the conclusion as for the compliance of the tested functionality or of the whole project with the requirements.

The outline of the report writing

The testing report, as well as any other document, has its own structure. The easiest and the most comfortable for the perception structure consists of three parts:

Let’s have a deep look on the contents of every part of the testing report.

The contents of the heading part of the report include the following:

The contents of the second part of the report (the final information about the testing results) include the following:

The quality level is calculated by the following formula:

It is useful to make graphs of the quality level changes from version to version for better understanding of the functionality or project quality state. 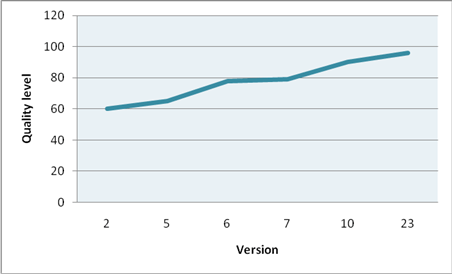 It is clear from the graph that the project quality state is rising in leaps and bounds with every version and will reach the point of 100 % soon.

The final part of the report consists of the detailed results of passing the test cases:

This part also contains recommendations as for the results of the check of tickets on the basis of quality product metrics in software testing.

Such metrics as “Closed/All Bugs” (if the data coefficient is close to “1”, we can say about the improvement of the product state), “Bugs by Severity”, and “Bugs by Priority” point to the level of product approximation to the achievement of quality criteria by bugs and its dynamics.

Such metrics as “Reopened/Closed Bugs” and “Not_a_bug/New Bugs” aim at tracking the work of separate participants of developing and testing groups. The “Reopened/Closed Bugs” metric lets you to evaluate the work of developers: to see how often they admit the appearance of bugs that were fixed earlier; the “Not_a_bug/New Bugs” metric aims at evaluating the work of testers: to see how often they make mistakes in bug description.

Of course, these metrics should be applied depending on the specific character of the product. The metrics of quality carry useful information about the state of the project in case you track them during the process of testing and compare the received results with the results of testing of previous versions.

One of the main report rules is that it must not include the unnecessary and repeated information. But before you begin to draw the report it is necessary to make an analysis of the performed actions. Information in the report can change depending on what was tested.

Let’s examine the types of reports depending on the type of the accomplished work:

The enumerated above structure of the report is almost suitable for the case of prerelease testing of the whole version and also for testing just implemented feature. It is so because during the prerelease testing tickets are usually checked and the acceptance testing is performed. Also if the new feature is being implemented, especially a big one, it is akin to the whole project.

If the regressive testing of a separate functionality/module of the project is performed, the usual statistics will be enough.

We do not include the statistics of passing the test cases while writing the report on the check of tickets because we do not pass them. And with the help of metrics of quality we can evaluate the progress of the project as a result of fixing the bugs for the better or for the worse, as well as the work of developers and testers.

For whom do we write reports?

The contents of the report can also change depending on the target reader:

It means that having defined the type of the goal, which will be described in the report, we must ask ourselves the following questions at first:

1) The Project Manager needs to know the following:

2) The Developer needs to know the following:

3) Other tester and test manager need to know the following:

The example of the testing report

Let’s have a look at the example of the report on the results of the prerelease testing.

Recommendations: the version is ready for release.

To learn more on how to improve manual testing process, check out our article on 6 ways to improve software testing.

It is not enough to know the common structure (pattern) of the testing report design to write it effectively. The report will not be effective without the preliminary analysis. What does the analysis of testing results include? It includes the following:

And let your product be of high quality!

Get details on the Apriorit’s software QA skills and projects