In one of our previous articles, we considered the basics of Windows driver testing. Our experts explained the Windows device driver testing process.

In this article, we dig deeper into Microsoft’s testing process, called Windows Hardware Quality Labs (WHQL) testing. We explain the deployment of WHQL infrastructure and the WHQL testing flow. This article will be useful for quality assurance specialists who are preparing Windows drivers for Microsoft Hardware Certification.

What is WHQL testing?

Why do you need Microsoft Hardware Certification?

What is WHQL testing?

Windows Hardware Quality Labs is a testing procedure that allows you to test the reliability and compatibility of your device or driver with Windows operating systems. Successfully passing all the tests makes it possible to get Microsoft Hardware Certification for your device or driver. Moreover, this opens the door to get your driver distributed through Windows Update or the Microsoft Update Catalog.

During the WHQL testing procedure, you run a series of tests to verify the quality of your driver on third-party hardware or software. Then you submit the log files for Microsoft to review. If your Windows driver successfully passed all the WHQL tests, Microsoft will send you a WHQL release signature file that you should add to the driver installation package. This Windows Hardware Certification confirms that your driver is compatible with Windows.

Previously, Microsoft charged a fee for WHQL testing, but now the procedure is free.

WHQL testing is performed with a special toolkit depending on the target operating system. There are three of them:

Table 1 below shows which version of which kit should be used with a given operating system. Table 1. WHQL toolkit versions according to the target operating system

Why do you need Microsoft Hardware Certification?

Without Microsoft Hardware Certification, a user will see a warning message when installing your driver. This message says that Windows can’t verify the publisher of the software or that your software has not passed Windows Logo testing to verify its compatibility with Windows.

WHQL certified drivers are included in the Microsoft Compatibility Center, which provides the latest updates to the Windows operating system. This allows end users to download your driver automatically when they use a device for the first time.

With WHQL driver certification provided by Microsoft, your driver gets better test coverage. This allows testers to find almost all driver defects and let developers fix them before the driver release. The testing process also helps test centers better support the driver device. Microsoft Hardware Certification proves that a driver has been tested thoroughly with Microsoft-approved QA standards.

In addition, Microsoft Hardware Certification prevents driver tampering. This is great from a security perspective, but it also means that any driver updates will require your driver to pass WHQL testing again.

Let’s take a closer look at the process of WHQL testing and obtaining Microsoft Hardware Certification.

WHQL testing requires a specific test environment. Table 2 shows what components should be prepared to perform testing with Windows HLK for Windows 10 clients. Installing the Windows HLK Controller and Studio doesn’t take much effort. You just need to download and run the setup file of the kit corresponding to the target operating system. During installation, you need to allow a port to be opened. Otherwise, the installation may fail. Installing the HLK Controller and Studio took us approximately 45 minutes.

The Windows HLK Client takes just several minutes to install on the test computer using an installer file. If the test computer is not a member of the local network domain, the Guest account should be enabled on it. To begin the installation, it’s first necessary to mount the test server’s shared folder – called HLKInstall – with its subfolder named Client, as shown in Image 1. 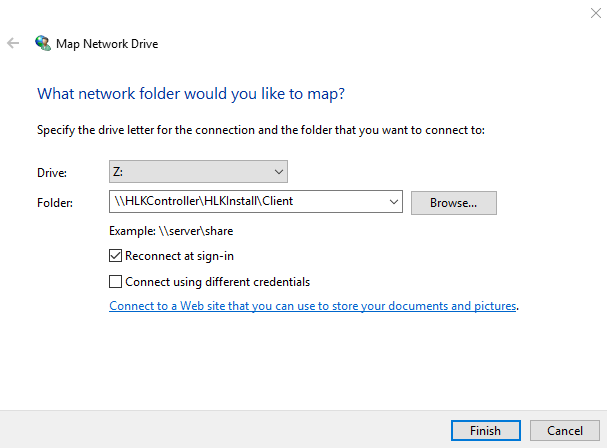 From the mounted folder, it’s enough to run the Windows Command Setup.cmd (see Image 2). It will determine the computer’s processor architecture and launch the appropriate installer. The testing process with WHQL can be divided into five steps:

Let’s take a closer look at each of these steps. To perform testing, you’ll probably have to operate with a certain group of test computers. Such a group in Windows HLK is called a machine pool. It defines on which machines you want to test.

By default, all new clients are placed into the default pool. However, this pool can’t be used for testing purposes. So you have to create a new one. To do this, launch HLK Studio on the test server and click the Configuration button at the top of the page. Then, select $ (Root) and choose the Create Machine Pool option in the context menu. You can rename your pool as you want (see Image 3).

After the pool has been created, just drag and drop your client from the default pool into the new pool as shown in Image 4.

Image 4. Drag and drop the client into the custom machine pool

Switch the client to the Ready status in the context menu. This makes the client initialize on the test computer and get ready for testing. If you forget to switch the status, you won’t be able to proceed with testing the client.

The next step is to create a project, which defines what you want to test. To create one, you just need to click the Create project button in Windows HLK Studio.

Here, you can also enter a custom name for the project. If the project wasn’t loaded by default (in which case its name should appear under the Project tab), you can provide a custom name via the context menu.

Image 7. Load the created test project via the context menu

The next step is to select a target to be tested. A target in Windows HLK is an individually testable feature that your device or driver implements. To select one, click on the Selection tab under the name of your project and choose your pool of clients.

Image 8. Selecting a target for testing

As you can see from Image 8, targets can be filtered by the following options:

It’s necessary to select all the features of a specific product type for a device or driver to receive Microsoft Hardware Certification.

The Tests tab in Windows HLK Studio shows the tests for the selected target. All tests are categorized by the test phase as shown in Image 9. Let’s look closer at each category of tests:

It doesn’t matter that different test phases might include the same test. For instance, the Sleep with I/O before and after test is suggested by HLK Studio in two phases – Development and Integration and Reliability. The difference is in the way the test is conducted. At the Development and Integration phase, the test lasts only about 5 minutes, whereas at the Reliability phase it’s run much longer – about 45 minutes. A detailed description of each test can be found on the HLK Test Reference page.

To select a specific test in HLK Studio, just check the box and click on Run Selected (Image 10). Image 10. Select and run a test

The results of the tests are displayed in the Results tab. After each test is completed, the status column is updated with the result: pass or fail. To see the details of any test, you can use log files. A log file has the .wtl extension and can be opened with the Windows HLK Manager included in the kit. If any test has failed, you can find a description of the error in the report. After the reason for the test failure is eliminated, the test can be run again.

If all tests for the selected target have been passed successfully, there will be an option on the Package tab of the Windows HLK Studio to create a package that can be sent for certification by Microsoft (see Image 14). You can add the driver, symbols (via the context menu of the added driver), and a supplemental folder (Readme files, error descriptions, etc.) to the package if needed.

Click the Create Package button to generate the package. Here, the following signing options will be suggested:

The form for submitting the package for signing by Microsoft is available here (authorization with a Microsoft account is required).

Read also:
How to Develop a Windows Driver Using a QEMU Virtual Device

Here are some tips for testers who are going to check their drivers with WHQL testing:

The Apriorit team uses the Windows Hardware Lab Kit not only to get Microsoft Hardware Certification for drivers we develop but also to ensure driver quality for our clients.