You have an Android Device and you are familiar with Linux-based operating systems. Maybe, you like SSH or telnet to communicate with the device; you want to setup your device as a router to connect home PC to the Internet. However, you will be surprised. Android has neither login screen nor possibility to gain privileged user access to the system to do these things. This is one of the Android security principles to isolate applications from the user, each other, and the system.

In this article, I will describe you how to obtain root access on Android device in spite of security, so basically we will discuss some Android exploit development tips. I will delve deeply into one of the Android rooting principles – the adb exhaustion attack, one of the Andoid vulnerabilities, which is simpler to understand than a previous udev exploit. It is suitable for all Android-powered devices with the version 2.2 and lower.

In three words, the main rooting idea is to get super user rights on a device shell. Like a standard Linux shell, it allows you to interact with the device by executing commands from the shell. The shell can be accessed via ADB (Android Debug Bridge) command tool. The main purposes of the ADB on Android-powered devices are debugging, helping to develop applications and also, in some cases, it is used for synchronization purposes (when syncing HTC Wildfire, it is required to turn on the USB Debugging). We will use the ADB tool for uploading and executing the exploit, working with rooted device via super user shell with full access to whole device file system, programs and services.

We are interested only in the third component. The daemon runs on a device and communicates with a client through a server. When you issue the ADB command like a shell, the daemon will create a shell instance on a device and redirect its output to the client. Obviously, the shell new instance created by the daemon inherits rights and environment from its parent. As the daemon runs with the AID_SHELL rights, the shell new instance and all processes created by the shell will have the same access rights. Hence, to get super user rights in the shell, we just need the daemon to be running with these rights.

To understand why the ADB daemon has the ADT_SHELL user space, we will consider how it is started up and look at its initialization script.

The first user land process started after the Android device booting is the init process. After initialization and starting of internal services like property service, ueventd service etc., it begins parsing the init.rc configuration script. The ADB daemon is mentioned in the script as the service and it is started by the init service on the boot if the USB Debugging is enabled.

Let’s look at the ADB daemon initialization source code. The main daemon entry point, where it starts its execution, is adb_main. I skipped non significant pieces of code to focus your attention on the daemon security.

So, what we see here. When the ADB daemon is starting, it has super user rights, like the init process has. However, the daemon reads some properties from the system and decides to set secure flag or not. Usually, if the device is not a development device and it is not an emulator, the properties have such values:

After properties are checked, the secure flag is set to true, and we hit to such code section:

Starting from this point, the daemon continues its execution with the AID_SHELL user id as it drops root privileges. All processes, started by the ADB daemon, like sh, will inherit its rights and will work in very limited environment. It is really sad, isn’t it?

The main Android device rooting principle of the exploit described in this article is the setuid exhaustion attack. The setuid function changes the user id for a process only in case if there are resources available, otherwise it fails and the process remains with that user id, with which it was started. Let’s look at the resources that can be limited by the Linux operating system. We are interested only in the RLIMIT_NPROC resource. This resource limits maximum numbers of processes that can be created with the same user id. If you have reached the limit, you can’t create more processes with this user id. The setuid function doesn’t create processes, but it follows this rule. Once, the NPROC limit for the AID_SHELL user is reached, setuid fails and the process continues its execution with the user id set before the setuid call. It means, when the ADB daemon starts with the AID_ROOT user id and tries to change it for AID_SHELL, for which NPROC is reached, setuid fails and the daemon user id remains AID_ROOT.

It is easy enough, isn’t it?

In files attached to the article, you can find the binary file and Android root exploit source code. They implement the adb exhaustion attack explained above. The rooting process is easy for a user and I will describe how to use it below, but now, I will go into detail about the attack implementation. I will touch upon the Android rooting code structure and go into detail about a few important points.

Let’s look at the root() function in the impl.cpp file. It implements the main logic of the exploit.

At the beginning, after it gets and prints the NPROC limits, it runs the ADB daemon PID and saves it into a variable. It will be used later to kill original process. Next, look at the fork loop:

The code above represents an infinite loop. It forks calling process and exits from a child. That is enough because PID, allocated for current user, remains active until the parent process exits. The loop works until the fork function returns negative value. It means that we have reached the NPROC limit. Let’s look at the next code piece. The PID is negative, but we have to remember that there is one more shell user process that will be terminated soon. This process is the ADB daemon that is still running. We couldn’t kill it on start because the init process would start it again and it is an advantage for us. So, as soon as we reach that condition, we read the ADB daemon PID and check if its user id is AID_SHELL or AID_ROOT (because we could reach the condition from the second or third iteration).If it is AID_SHELL, the program just sends SIGKILL to it and continues the loop (soon, we will reach it again). Once the daemon is killed, one more PID for this user is freed. We have to allocate this PID for the AID_SHELL user as soon as possible to prevent the daemon setting its user id as AID_SHELL. Ideally, there will be two additional loops: the first one forks and allocates a new PID for the AID_SHELL user and, as the result, the second one reaches the limit again, checks the daemon PID that should be AID_ROOT and exits. However, because of lack of resources or lots of delays, there could be rather more iterations.

To prevent the exploit infinite loop in case if it is impossible to start the ADB daemon as root, there is a respawn guard for each forked child. Ten iterations and one second timeout have been chosen empirically when I was working with several devices and I found that some devices had a too big NPROC limit. It is obvious. They enquire too much processor resources to handle all created child processes. So, you may change the guard to fit your requirements or device.

You can add a path to platform-tools into your PATH variable or type the absolute path to the adb.exe executable any time later.

The second step is to download and install the Android NDK package and the Cygwin environment. Install them in the same location with SDK and add a path to your NDK package into the PATH variable or into your Cygwin.bash_profile. Then unpack a project archive attached to this article into your working directory available for Cygwin.

The project structure is very simple. In the AndroidExploit root, you will find two directories. In the bin directory, I have placed a precompiled exploit binary and a windows shell script file. The jni directory contains sources and the NDK build scripts.

To build the project, run the Cygwin environment, change a directory to the project/jni directory, and execute ndk-build. The Compiler output should look like this:

You can find an executable at libs/armeabi/exploit. The path is relative to the root of the project.

The next paragraph describes how to use the binary file. You download the Android SDK, install platform-tools and make them available from the PATH variable. At first, enable the USB Debugging on your device. For this, from the main screen, go to Settings -> Applications -> Development and check the USB Debugging option, then connect your device to the PC and check that it has been detected by Windows Device Manager. Otherwise, install the Android USB drivers for your device from the manufacturer site.

We are on the right way! Let’s go to the device. Type the adb shell command, which will start the device shell, and then check your id to see who you are.

As it was expected, you are a shell user that has no privileges, no access, nothing … The only things you can do are installing programs and listing some directories. In other words, you can perform only permitted actions. I was very surprised when I couldn’t read /data/data directory, it was impossible for me to list it and see what programs were installed on my device.

Break the law. Go to the exploit bin directory and type adb push exploit /data/local/tmp. This command will upload the exploit in the device temporary directory available for the user. Then, type adb shell and change the directory to /data/local/tmp. The ls –l command will show you its content and permissions on recently uploaded files. Make the file executable by executing chmod exploit 776 and run it by ./exploit root. 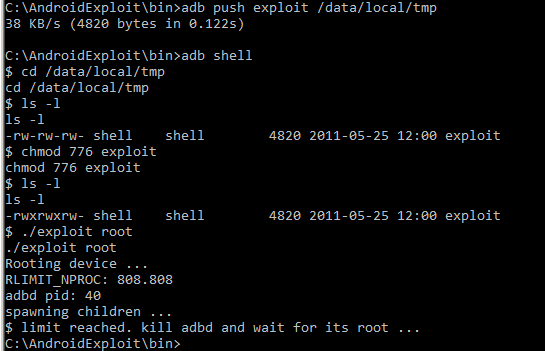 The output shows NPROC and ADB daemon PID. Then, as soon as RLIMIT is reached, the shell will be disconnected. Wait for ~5 seconds and type adb shell again. As a result, you should see root # shell. Type id to make sure you are a root.

Yes, you are! Now, you can do anything even… let me think … even damage your device! So, all things you will do next are at your risk. Be careful!

In this article we discussed how to root Androidusing ADB. One more time I want to notice that the exploit works only on Android devices with versions 2.2 and older.