This article describes the story of an experiment whose main goal was to perform the Windows OS debugging using the USB bus. First of all, information in this article will be interesting for the developers of drivers and Windows OS low level components functioning in the kernel mode. Also, this article can be interesting for engineers and analysts that develop devices, which interact with Windows OS, those, who have a need in USB debugging BIOS, and everybody who is just interested in how to USB debug Windows.

In this part of the article, I will give a short description of how the tools and methods of the Windows debug modes evolved together with the development of software and hardware.

Formerly, the host machine + target machine pair was used for debugging of drivers or Windows OS components. Both computers were connected with the null modem cable via the serial port. Then, on one of the machines (host machine), the Win debugger application started and, on another machine (target machine), the driver or OS component to be debugged started. The main shortcoming was the low speed of data transfer that, in its turn, influenced the debugging speed significantly.

After the appearance of the firewire interface, the data transfer speed increased notably. This made the debugging process more pleasant and, at the same time, caused one serious problem. The support of this mode appeared starting from the Windows XP OS.

One should also remember that the installation of expansion cards is not always possible.

Today, the USB interface is the most popular among the data transfer interfaces as it combines the high speed and simplicity of usage. There was no support for debugging via USB interface in Windows OS 2000 – 2003. Such support appeared starting from Windows Vista OS and can be also used for USB debugging Windows 7/8.

There is a sequence of rules and tips that should be performed before the debugging mechanism via USB bus is operable. The most important is that the USB interface is present practically on all devices where Windows Vista OS or later versions of this family can be installed. This, in its turn, increases the chance that when the hard-to-detect bug appears, we will be able to use modern debugging facilities for its removal.

Next, I will describe a number of rules and tips that will help you to perform the debugging via the USB bus.

In this part of the article, there are 7 steps and several tips of how to perform the Windows OS debugging using the USB bus.

Step 1: Buy or borrow a special device for USB debugging

You need to use a special USB 2.0 debug cable device to perform the Host Machine + USB + Target Machine debugging mechanism. This cable is not a standard USB 2.0 cable, because it has an extra hardware component that makes it compatible with the USB2 Debug Device Functional Specification. You can find these cables with an Internet search for “USB 2.0 debug cable”.

In the current experiment, I used the NET20DC device produced by Ajays company that is displayed on Figure 1.

You can use another similar device.

Install the WinDbg debugger on the host machine (the WinDbg debugger version must be not lower than 6.5.3.8). WinDbg is a free Win debugger distributed by the Microsoft company. Formerly, it was supplied separately and now it is included in the Windows Driver Kit (WDK) package.

In the Links section of the article, the references to the manufacturer web site, where WinDbg is available for downloading, are specified.

Step 3: Install the drivers for USB 2.0 Debug Cable device on the host

For the further work with the Ajays device, you should install the driver for this device on the host machine. The driver has the usb2dbg.sys name, it is supplied together with WinDbg, and is located in the application folder (.\usb\usb2dbg.sys).

You should find two free USB ports on the host machine and plug in both sockets of the Ajays NET20DC device. Actions, mentioned above, are described on Figure 2. Fig.2 – Plugging the Ajays device for the driver installation

Use the New Hardware Installation Wizard and perform the driver installation from the WinDbg folder.

Step 4: Create the Boot Entry for the Debug Mode

Now, let’s turn to the target machine, which will serve as the debugged unit. Let’s create a debug boot record using the bcdedit utility, which is the manager of boot records in Windows Vista/7 OS. To do this, we need the following: 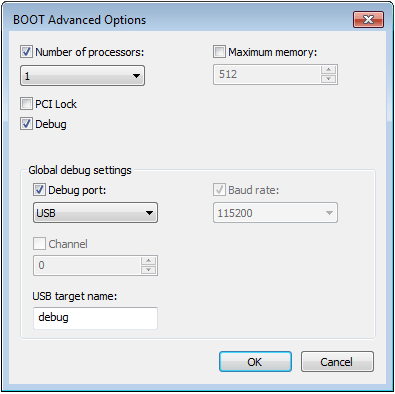 On the figure above, pay attention to the USB target name field that has the debug value. This field serves as the name of the session for the debugging.

It is also worth mentioning that any USB compatible devices (including USB keyboard) will not function before the OS start.

Disabling of the Legacy USB Support option for AMI BIOS v.02.61 is displayed on Figure 4. To perform the debugging via the USB bus, the Ajays device output ports must be connected to the USB port 1. This rule concerns the host machine.

To define the USB port 1, there is a special USB View utility produced by Microsoft. You can find it by yourself or see the Links section of the article.

To define the USB port 1, you will have to check all ports sequentially by inserting the Ajays NET20DC device in each of them and checking the program reports.

The general view of the USB View program where the Ajays device is connected to the USB port 1 is displayed below on Figure 5.

There are two ways to configure WinDbg for the USB debugging.

The first way: Create a shortcut with cmd parameters. To do this, perform the following steps:

In my opinion, the first method is much easier and does not require additional actions in future.

The second way: Configure on the Fly.

After the WinDbg start, do the following:

Actions described above are displayed on Figure 6. Fig.6 – WinDbg configuration on the Fly

Everything is ready for debugging. The general view of the Host Machine + USB + Target Machine scheme is displayed on Figure 7. To make it clear, all other functional parts of the PC were disconnected. On the host machine, after the debugger start, the following record will be displayed in the Command window:

After this, start the target machine, select the “Debug” boot record, and continue the work.

After some time, if all actions described above were performed correctly, the service information will be displayed in the debugger Command window as on Figure 8. Sometimes, there are cases when the debugger displays the service information but the initial breakpoint doesn’t work. To move to the full-fledged debug mode, you need to press Ctrl + Pause / Break by yourself.

And that is all! Now, you can perform the debugging of any device with installed OS not lower than Windows Vista, including Windows 7/8, and that has a USB bus with the USB port 1.